Avoid These 3 Attitudes Toward Money at All Costs!

When hard times come everyone looks for a scapegoat. Blame tough times on the economy, or the government, or a mate whose use of credit cards has been less than frugal. Whether it is an organization, a church, a business, or a family, when the money begins to dry up there has to be a cause somewhere—a reason for the problem. Somebody, or something, has to be responsible, so the search for blame gets underway.

“This is all your fault!” we tell each other. “If you hadn’t spent so much money, our finances wouldn’t be in the shape they’re in.” Blaming somebody else may point out why there are too much debt and too little money, but it doesn’t cause the problem to go away. It only defines it.

Whether it is your government, your church, or your family, there is a common fault today. We’re borrowing from the future to pay yesterday’s bills, and sooner or later a day of reckoning has to be faced.

Borrowing is like exhaling a bit more than you inhale, which may be possible for a few brief minutes but is bound to produce fatigue and eventual collapse. Nature is not as forgiving as our economic system.

When I was with a director of a national bank in a developing country where inflation hovered around 40%, I asked, “How can things continue like this?” He smiled and said, “It’s easy; we just print more money.” A government may print more money, weakening its currency, and avoiding facing the reality of debt, but you can’t escape the stark reality of debt in your family by doing the same thing.

The rich rule over the poor, and the borrower is servant to the lender.  Proverbs 22:7

You have two choices: (1) Bring your spending into line with your income, or (2) Increase your cash flow. Borrowing money isn’t the solution. Like an alcoholic stupor, it only sedates the conscience and postpones the moment of truth.

Scores of people, as well as institutions, hope to outlive their problem, but few actually do. Scripture says, “The rich rule over the poor, and the borrower is servant to the lender” (Proverbs 22:7).

Today our economic problems are the result of three fatal attitudes:

Fatal mistake #1: Thinking that borrowing more money is the solution to my problem.

An economics professor who filed for bankruptcy was interviewed on TV by a reporter, who asked how he could get into trouble financially when he knew better. His reply.  “It was my credit cards. I kept thinking I would catch up with them but they caught up with me.” Excessive debt not only is displeasing to the Lord but it will ruin you financially.

Fatal mistake #2: Thinking I’ve got to have it now.

Indulgence is dynamite and it can destroy you. Learn to sift your wants from your needs, and realize God’s promise of provision extends only to your needs, not your wishes or your wants.  The concept of small beginnings that grow seems to have been forgotten. The attitude of “I’ve got to have it now” is selfish as well as dangerous.

An interview of several thousand people who were in deep financial trouble revealed that the vast majority of them knew neither how much they owed nor how much interest they were paying on their debt.  When Paul wrote, “Let no debt remain outstanding, except the continuing debt to love one another…” (Romans 13:8), he meant exactly what he said.  It’s still good economics today.

Speaker, author, and Bible teacher, Dr. Harold Sala founded Guidelines in 1963. Pioneering the five-minute commentary in Christian radio, Dr. Sala’s daily “Guidelines-A Five Minute Commentary on Living” is broadcast in 49 of the 50 states and is heard the world over in a variety of languages.

Sala, who holds a Ph.D. in biblical text, has authored over 60 books published in19 languages. He speaks and teaches frequently at conferences, seminars, and churches worldwide. Residing in Mission Viejo, California, Harold and his wife, Darlene, have three adult children and eight well-loved grandchildren.

You can read more of Dr. Wala’s articles HERE!

HELP JACOB’S FOUNTAIN KEEP THE ARTICLES FLOWING. This website is not sponsored in any way by any organization. If God is leading you to send some help, you can do so via credit card or Paypal using the DONATE button below:

VIDEO OF THE DAY 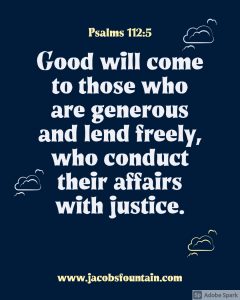 LATEST FROM THE FOUNTAIN

7 Ways to Make This Year Great

Some folks measure time by years--January 1 to December 31. Some folks keep track of it by birthdays. Some...

Here’s What Stands in the Way of Your Prayers

Abraham Lincoln, the American president who faced tremendous personal struggles in his life, once said, "I...

Don’t Leave the Baby in the Manger

Everybody loves babies, right? Commuters in crowded airports, shoppers on a street corner, even hard-nosed...